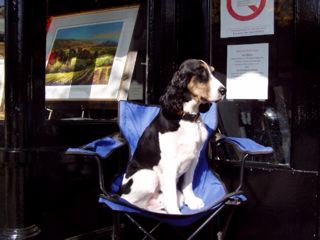 It can hurt forever…

That CHARLIE was one great dog…

Dear Subscriber, On September 06, 2017 I had rather major shoulder surgery, and decided to take a little time off. I will begin posting again no later that 11/13/2017. In the meantime, the Post below, It can hurt forever… went on-line this past September 5th. I apologize for not getting it out to you. You might double-check previous blogs as well, just to make sure You haven’t missed any of them during August. Thank you for hanging in there with me and I will do my best to again post weekly. It’s not as if there isn’t a lot to say… Thank you for your interest and your trust…, bob

The heartbreak of losing a pet…

Nine  years ago this past July, I had to put my dog Charlie down. I am not embarrassed to tell you that I still cry. As many know, there are losses that can hurt forever. Knowing I was going  to have to put him to rest, I wrote the letter which now appears below in this blog, several days before saying goodbye… I sent it out to over 1500-1800 people who knew of Charlie, because I named a coffee house after him, which stood next door to my art gallery in Wilmette, Illinois. CHARLIE’S COFFEE HOUSE was a pretty cool place, as was the warm and loving canine it was named after. The several hundred notes of condolence which followed my loss were in themselves often heartbreaking, as my friends and customers wrote of their losses over the years. So many beloved animals, friends and tears.

As I have been watching the tragedy unfold in and around Houston, Texas, it reminded me of the millions and millions of  lives changed forever — Hurricanes Sandy, Katrina, now Harvey and maybe Irma. That is not to discount equally horrific events such as wildfires, earthquakes, and certainly wars around the world. The loss of life, property and one’s existence is beyond comprehension.

Fortunately, there are local and distant animal shelters doing as much and maybe even more than expected to keep as many of these displaced animals safe, with the goal to reunite them with their owners, hopefully in the not-too-distant future. And although dogs and cats seem to be getting the most attention, be assured that cattle and horses as well as other farm and ranch animals are being rescued when and where possible.

I’ve had to send my Charlie-letter out 10-12 times over the last several months, as friends, customers and acquaintances have said their goodbyes. Now I would like to share it with anyone whose heart is breaking, but especially those in Texas, and possibly Louisiana.

Some of the Hurricane Harvey families will experience a permanent loss, while many others will eventually find their loving animals, alive and well. Those who might lose their loving pets forever might find solace in the fact that there is a chance your pet is in a shelter or another loving home. Whatever the case, please take heart in the words that follow. For we have loved, and been loved, and we will have the memory forever. And so it goes…

“There’s only one great dog…”

So says Mary Ludington in her book, The Nature of Dogs.

Dear Texans,Charlie — Charles Chandler Rodman Danon — was born February 19, 1996, and put to rest, July 29, 2008. I wanted to name him Charlie, or Chandler, in memory of a great friend. My daughter Kate wanted to name him Rodman, after you know whom. I went with Charlie.

Most of us who are dog lovers totally get it — these great, tail-wagging creatures are our one true loyal, all loving companion, totally devoted, with unconditional love. Charlie was true to all of those qualities, always and forever.

Charlie was a gift for my daughter Kate when she was in 8th grade, but I knew then, and I always knew, he was “my dog.” He loved Kate dearly and the Reiter family and their dog “Bob,” and the Hannas and their dog Desi. Oh how he loved them.

I used to tell people who stopped by my art and frame gallery in Wilmette, that Charlie was “the hardest working dog in Wilmette.” I would say that, as Charlie lounged in his blue canvass chair, reaching out with his paw to “high-five.” He often walked around the customer or friend who stopped in to say hello, circling, purposely bumping into their legs, looking to be petted. Back then Charlie was a world-class schmoozer. He worked the customers and their children like no other…

After I opened CHARLIE’S COFFEE HOUSE (named for “you know whom”), next door to my gallery, Charlie would on occasion, sneak in for a little schmoozing. Village ordinances didn’t allow dogs in “restaurants,” but what the hell. Charlie would work his friends on both sides of the wall, and work them well. Quite possibly, Charlie’s single greatest moment at CHARLIE’S was the last time Tom Dundee sang there, back in 2005-06. From the gallery next door, Charlie howled two verses of City of New Orleans, with Tom. Now that I think about it, it may have also been one of Tom’s greatest moments.

At the end of every performance, Charlie had a way of sneaking into CHARLIE’S, as the musicians walked past him, as they returned to the gallery and their guitar cases. Charlie would strut around the room, schmoozing and sniffing for snacks, which fell to the floor. It was so funny; when  my friends were in the room, Charlie knew it, and he would seek them out. God how that dog could work a room. What the hell!

Sadly, now your loving pet may have joined the pack. And if so, you can be assured that Charlie, Desi, George and Reebok, and all those other “great dogs,” will welcome them with a  smiling bark, an open heart and the knowledge that they could not have been loved any more than they were by you… That was one beautiful, sweet and lucky friend.

How fortunate we all have been…, Bob