Rigged against Trump? Not even close!

The Trump is an imbecile and an embarrassment to the Democratic process…I also feel it’s safe to say, at this point in time, that Donald J. Trump is an embarrassment to any and all who have a brain, and are smart enough to recognize that the man has no class, no morals, and thinks the entire world revolves around him. Last week in New York, on the evening of October 20th, at the annual Alfred E. Smith Memorial Foundation Dinner (a benefit for Catholic Charities), Hillary Clinton and Donald Trump exchanged a few barbs to the delight of those in attendance.

Well some of those barbs were a little sharp, from both candidates. But the worst by far, over the course of the  evening and possibly of the entire electoral season, was when The Trump said, “Hillary believes that it’s vital to deceive the people by having one public policy and a totally different policy in private.” And many of those in attendance began to growl and jeer in protest. Then came the kicker, “Here she is tonight, in public, pretending not to hate Catholics…”

So I ask you … when are Paul Ryan and Company going to really pull the plug on their worthless, insulting candidate?   Trump is quite possibly the rudest, crudest, most ignorant, and worse-than-evil, ego centric person to ever walk the face of the earth!! His candidacy and mere existence is stunning to much of mankind … But then again, Putin seems to like the guy!

Is the election really rigged…?
The Trump would like us all to believe the media is against him when, in fact, the media helped make him. During the primaries, I heard that CNN was giving The Trump 42+% of their coverage. And I remember Ohio Governor Kasich stating that if he had that kind of media coverage, he’d probably be the nominee.

Voter suppression has gone on for years. As the ACLU reported, “Since 2008, states across the country have passed measures to make it harder for Americans — particularly black people, the elderly, students, and people with disabilities — to exercise their fundamental right to cast a ballot. These measures include cuts to early voting, voter ID laws, and purges of voter rolls.”

Jesse Jackson had a truly informative Op Ed piece in today’s (10/25/2016) Chicago Sun-Times. Jackson feels that if, in fact, the election “is rigged,” it’s rigged in favor of The Trump. Rev. Jackson gives numerous examples of voter suppression, which would clearly favor the GOP and their frightening Presidential candidate. Jackson points out that “We deserve a unified, national electoral system that guarantees every citizen a protected right to vote, the most fundamental right of all in a democracy.” For the complete article click here:

The bottom line…
Trump is Palin and Palin is Trump. I’m a little embarrassed to say this, but I think Sarah Palin is a little bit brighter than The Trump. Now neither one is the sharpest tack on the bulletin board, and when interviewed, many of their supporters lacked any real knowledge or understanding of the issues or the facts. And the candidates themselves weren’t much more knowledgeable. But as far as political experience goes she out-points him though that isn’t really saying very much.

After the last election, when President Obama trounced Romney, the GOP was going to do a post-election autopsy to re-vamp their party to a point that the GOP would be more attractive to a greater number of Americans than in recent elections, especially Blacks and Hispanics. But it doesn’t seem to be working. It doesn’t seem to me that The Trump makes a good representative for that effort. For more information Click here:

I feel strongly that Hillary Clinton will be the next President of the United States. She is by far the safest, most experienced and qualified candidate. But as I have stated in the past, my ideal election would have the very best, most qualified GOP candidate, running against the very best DNC candidate. The country only wins when that takes place. And however one feels about Hillary, The Trump brings nothing to the table but hate, disrespect, and a shallowness seldom seen in any top executive, let alone the President of the United States… So keep your fingers crossed…

As an aside, assuming The Trump doesn’t win, maybe we can watch it all on Trump TV sometime next year. Maybe a political TV show?  A comedy about a phony, not very smart guy with orange hair who had a reality TV show and decides he wants to run for President of the United States, because he thinks by being an even “bigger” celebrity he can grope and assault more women. Stay tuned, “House of Lard” can’t be far off…

So The Trump is the showman, the media has been the conduit, and The Trump’s followers, many of whom thought Sarah Palin was just terrific, are just as out of touch as their candidate.

When The Trump is asked a question, his answers today are just as empty as they were during the GOP primary almost a year and a half ago. They are brief, they lack understanding and depth, and he quickly turns back to criticizing Hillary, the media, Paul Ryan and anyone else he can think of, in an effort to direct attention away from his ignorance.

In the last month, the press has become appreciably tougher with their questioning, but it should have always been that way — Ask the question, and get the answer. Push until the real answer to the original question is on the table.

I hope that once this year’s election is over the press will maintain a tough and direct line of questioning with all those they interview, regardless of the topic.  I know this will never actually happen, but wouldn’t you love, just once, to see an interviewer who is getting the brushoff say something like, “Please answer the question or go find another show. We are only interested in the truth.”  Or when the “interrupters” and the “over-talkers” won’t stop, how about, “Shut off their mikes.”  Again, it will never happen … but wouldn’t it be great?

More Trump… Not this week!
I’m going to stay away from The Trump/Billy Bush Pussy tapes, and the so-called “Locker room banter.”  The guy is low class, he’s kind of stupid, and he gets way too much attention.  So, no more Trump this week.

Aleppo, Mosul, and the daily, life threatening dangers that exist… 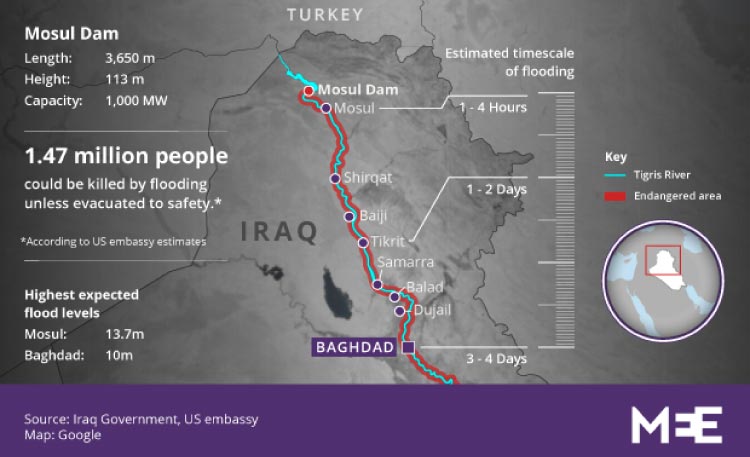 There is the relentless bombing of the people in Aleppo who cannot defend themselves. To this day I think that Obama made a mistake when he drew that “red line,” warning Assad about the use of chemical weapons. Read more here.

The president should have followed through with those so-called “enormous consequences,” but he did not. And now Russia seems to be running much of what takes place over there.

Then there is the dam just north of Mosul which, if damaged accidentally or, more likely, with intent, could cause flooding all the way south to Baghdad. That would immediately endanger hundreds and hundreds of thousands of lives. So the question becomes, “Is anyone watching out for and protecting the Mosul Dam?”

More and more, the world is becoming an extremely scary place and one of the scariest in my mind is the hydroelectric dam, north of Mosul.  It “faces risk of catastrophic failure…” Read more here.

And my worry is that ISIS will destroy the Mosul Dam in the coming days.