Apparently its about accountability, or the lack thereof…

Buddy, buddy… Mr. Trump and his lying National Security Advisor, General Flynn.
Seems these liars move about in the same circles. That said, Mr. Trump doesn’t have a clue what it means to be accountable for one’s actions. Especially as it relates to holding the highest office in the land.

Its all coming together now…
Mr. Trump has led the better part of his life with little or no accountability. Seriously, think about it. Prior to becoming President, while sitting upon his throne in Trump Tower, high above the city of New York, Trump believed he was King, the Supreme Ruler, the Dictator, the BIG CHEESE, Top Dog, Mr. BIGLY…

History tells us he was a major thug in his business and personal worlds, with little or no accountability. He could cheat any chef, electrician or contractor he wanted. He (thought he) could grope any woman, anytime, anywhere, and get away with it.  He could sue or counter-sue and tie adversaries up in court(s) for years, costing them boku bucks, and settling for pennies on the dollar. And he could lie all he wanted with little or no repercussions.

Then, Mr. Trump, somewhat unexpectedly becomes the President of the United States.  Wow!!
That changed everything. He suddenly became accountable; only he didn’t realize it. All of a sudden his word wasn’t law. He now had to work with other people, some of whom had also been elected to their positions in the government, as well as those who were appointees, or hires. And even though he is now the President, he must now work with people, who must work with other people, who don’t often work well together. Then he tells us it ain’t so easy. It’s more difficult than he thought and he misses his old life. Well dude… Go back to your old life, please!

How does he get away with it? He holds a rally of course…
Mr. Trump was speaking at a rally in Harrisburg, Pennsylvania on April 29th, the very same night he chose not to attend the White House Correspondents’ Dinner back in D.C. He didn’t want to be at that dinner because he knew he’d be joked about and trashed regarding his 100 Daze of buffoon status. So he held a rally where he spoke to thousands of his supporters, rattling off the same old, same old, and the audiences went crazy. As usual, he said  nothing of any substance. He never does… Nothing, zero, zip, nada… He says nothing, and he knows nothing and his crowds just lap it up.

He lies, he boasts, he inflates statistics, and he exaggerates like you’ve never heard. And the crowds go crazy. And those crowds? Well they’re almost as scary as the guy they’re cheering for. But what’s so amazing about Trump-worship is this… Basically, this guy really isn’t saying anything much different than he did back when he rode down that escalator to declare for the Presidency. At least 95% or more of what he said at last months rally, or the rally before that, or the one before that, or at the inauguration, is the same old- “I’m great, I’m a record breaker, I can fix anything, the media lies, I’ll build that wall, Obamacare will be repealed, and on, and on, and on. Yada, yada, yada… The same old hot air BS, that amounts to not very much.

Nope, it’s the same-old  crap he’s been rallying about month after month: Jobs, coal, how big his win against Hillary was, the electoral college, fake news, the media, rebuilding our military, the size of his audiences, the size of his hands, or whatever. The Democrats fail at everything, radical Islamic terrorists, etc.,etc. Everything Mr. Trump says and does is the biggest, and best, record-breaking, like you’ve never seen before, whatever it is, in the history of the world.

The point of all this is quite simple… Mr. Trump has little or no information to back up most of what slobbers down his jowls. He never gets into particulars, but there is always blame to be spread  anywhere but in Trump-world. He clearly doesn’t like to sit down and take questions from journalists on most of the topics he mentions, or any topic in the news because he knows little to nothing. There is no depth of understanding…

Now granted I do watch the talking heads on CNN quite a bit. And the  two statements that stuck out the most were comments on that last rally- (1) When Paul Bigala said that Trump was a “moral midget, and that he is dividing the country.” Bigala is a political commentator and a former advisor to Bill Clinton. (2) When David Gregen said that “Trump’s speech was the most divisive and deeply disturbing speech he’s ever heard by a sitting President…” If Bigala is too one sided for you, consider this- David Gergen, also a commentator and senior political analyst on CNN, served in the administrations of Richard Nixon, Gerald Ford, Ronald Reagan, and Bill Clinton. David Gergen is well liked, trusted, and immensely respected. 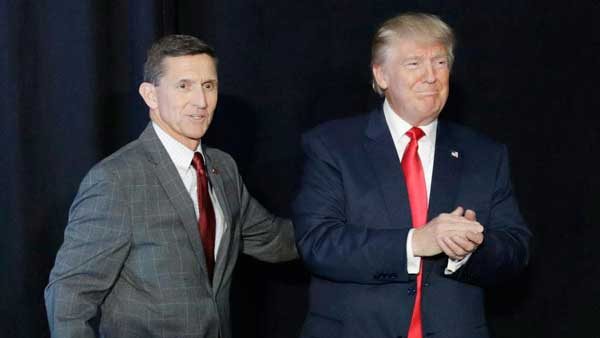 The bottom line…
Now come the diversions- It would be an honor to meet with Kim JONG-un, Trump wants to meet President Duterte of the Philippines, sure, let’s have a Government-shutdown, and he  won’t answer interview questions. What a piece of work this Trump guy is… This  morning he tweets that it was Obama who gave Gen. Michael Flynn, his high security clearance. Implying once again that its all Obama’s fault.  And that tweet came out just hours before former, acting *Attorney General Sally Yates and James Clapper, former  Director of National Intelligence, were scheduled to speak before the Senate subcommittee investigating Russia’s possible involvement in the U.S. Presidential election, via Michael Flynn, and possibly others on Trump’s Team. It’s all a diversion.

So the Merry-go-round in D.C., just keeps going in circles. When will it come to a stop, resulting in either Mr. Trump’s resignation or his impeachment? I suspect that will happen only when the GOP can’t keep ignoring the obvious. That “obvious” comes in different sizes and shapes. First, could be the mental well-being and competence of the person elected to be our 45th U.S. President. The 25th Amendment would refer to several possibilities regarding the removal or vacancy of the office of President. To reference, click here. The Second would be the possible collusion and or breaking of U.S. laws, some of which might relate to treason, within the Trump Administration, before, during and after the election itself.

Our current President, is an ignorant, bully of a man. He is a thug whose lies and insults demean the office, it’s credibility and the country. He lacks the understanding that what he says and does can affect 325 million citizens in this country alone. We cannot afford to have a person like Mr. Trump in an office and position of supreme authority that allows for the firing of nuclear weapons. The sooner he is replaced the better off the country and the world will be. And the sooner the GOP can get on board with that understanding, the better.

This week’s NeWerd is – * YatesGate – When the former, Acting Attorney General, Sally Yates came forth and presented to the White House, possible incriminating evidence against then, National Security Adviser, General Michael Flynn which might make him a blackmail target of the Russians. That awareness by AG Yates apparently led to her being fired, and then took the White House 18 days to act on this apparently “new” information regarding Gen. Flynn before he was fired. As Sally Yates said… “You don’t want a situation where a national security advisor could get blackmailed by the Russians.”