From his cold dead hand… 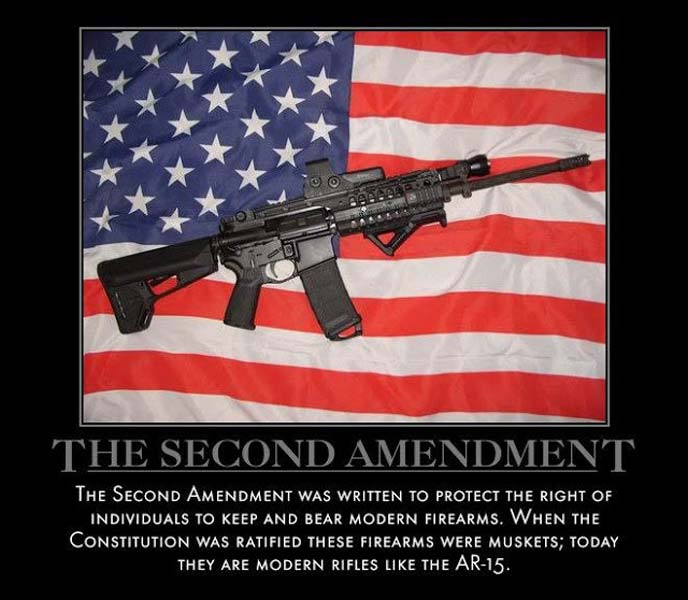 It was December 14, 2012. The shootings had been over for some time now, and various law enforcement agencies had their people walking around the school halls and classrooms. The evidence techs were taking measurements and photographs at this sad and grizzly scene. We would learn the body count later, but nothing being reported from outside the building seemed even remotely promising. As we learned more and more each day, one thing became quite clear… Enough already!!

An evidence technician lifted the now lifeless hand of the shooter from the .223 caliber Bushmaster “assault rifle,” used to murder twenty lower-school-aged children and six adults at the Sandy Hook Elementary School in Newtown, Connecticut. Looking down on the dead-by-suicide corpse laying at his feet, a police officer might have thought to himself, “assault rifle. Yes, this was definitely an ‘assault’ of unbelievable, and tragic proportion.” He would then place the weapon on a plastic tarp, next to the shooter’s cold dead body.

Now I don’t really know if that’s what took place at the scene. I can only imagine. But think about my opening line: “From his cold dead hand…” Former NRA president Charlton Heston was known to bugle similar words on more than one occasion, and I used to think, “You go Charlton! Give em hell! Pontificate away big man. Let everyone know that when you mess with the NRA, you’re messing with Charlton Heston, and when you mess with Charlton Heston, you’re messing with Moses. And a gun- toting Moses ain’t nobody to mess with.”

And so it goes… Follow CEO and Executive Vice President of the NRA, Wayne LaPierre, to the gates of hell as he fights to save your Second Amenment rights: “A well regulated Militia, being necessary to the security of a free State, the right of the people to keep and bear arms, shall not be infringed.”

Wayne would tell you those sacred words were adopted into the US Constitution just over 224 years ago, on December 15, 1791, to be exact, and that there is no need to change anything. He won’t, of course, address the fact that there have been a few changes over the years… little things like semiautomatic and automatic weapons with large clips to hold more bullets. And of course the armor piercing bullets weren’t available back in George Washington’s day. He doesn’t want to talk about any killings, some of which have been mass murders like those at the Sandy Hook Elementary School. He won’t tell you about the never ending drive-by shootings and gang violence in Chicago. But he’ll fight for the right of every NRA member, and every American, to own an Uzi submachine gun and armor piercing bullets. Anyone know the last time a hunter shot at Bambi using an Uzi?

How about the truth for a change… As reported in the New York Times on August 07, 2012, Wayne LaPierre said in his four-page plea for cash, that President Obama’s re-election would result in the “confiscation” of weapons and a possible ban on semi-automatic weapons. “The future of your Second Amendment rights will be at stake,” the letter stated. “And nothing less than the future of our country and our freedom will be at stake.” It was a statement geared to defeat Obama from being re-elected, and nothing more. But as we all know, President Barak Obama was re-elected… BIG TIME!!

Up until December 14, 2012, the day of those senseless murders of innocent school children, and their daily protectors, LaPierre’s statement was nowhere near the truth. If anything, President Obama has been lax on gun control issues. But now, President Obama and Americans everywhere should be demanding some sort of organized, bipartisan effort to control guns, to make all of our lives safer. In fact, if the NRA really had the “bullets” (so to speak) and the safety and well-being of Americans in their heart, they would lead the way in that effort.

Unfortunately, I don’t believe that will happen. But I do believe the NRA has a responsibility to help formulate and put forth a plan to assure that the all too frequent incidents like these senseless killings never, ever, happen, again.

The time for serious talk is long gone. It was yesterday, it is today, it is tomorrow… When asked shortly after the December 14, 2012, violent assault in Newtown, Connecticut, White House spokesman, Jay Carney said, “Today is not the day” to discuss gun legislation. He indicated that the various issues would be discussed… “the usual policy debates.”

Since Columbine, there have been more than 35 mass shootings in the U.S. Several hours after the tragic killings that took place in Newtown, Connecticut on December 14, 2012, President Obama addressed the nation and the world. “We’re going to have to come together and take meaningful action to prevent tragedies like this, regardless of politics …”

I agree with the President. But when will it happen? And will it happen at all? That’s a tough one, but if shooting six and seven year old children “multiple times with an assault rifle” doesn’t lead to “meaningful action,” then nothing will. And God help us all.

So Wayne LaPierre, how about you put down your gun and drag your cold beating heart up to the podium, and tell those parents, relatives and friends, of the victims at Sandy Hook Elementary School that the NRA will do everything they can, to promote real gun safety. Maybe an “assault weapon ban” would be a good start. And extensive background checks would certainly help. But to be clear, I am not suggesting that the right of gun ownership should be taken away. But better and stronger laws and a system that truly punishes those who break the law would go a long way. And personally I think I’d feel better if I believed Wayne-boy truly represented his membership more and gun manufacturers less. After all, who is paying his salary. Yea! Who is paying his salary?

The bottom line…
A week to the day after the mass killings at Sandy Hook Elementary School, Wayne LaPierre held a news conference- http://www.businessinsider.com/nra-press-conference-gun-control-sandy-hook- school-shooting-2012-12.

What follows is in no way being said to make a joke of the horrible tragedy at the Sandy Hook Elementary School. It is nothing more than an example of putting the shoe on the other foot, or for the sake of this conversation, putting the gun in someone else’s hands. So, imagine if…

A pretty, little, blonde-haired, blue-eyed, ten-year old girl wearing sneakers, Levis, and a pale yellow t- shirt with an image of Bambi on the front, along with the words…”I’m a little dear from Sandy Hook,” walks into the NRA press conference. She is carrying a long, narrow, pale green gym bag.

In attendance, with the usual, numerous drooling press, are a number of NRA members with all eyes focused on the guest speaker, Wayne LaPierre, adjusting the microphone in his cold, live, hand. The little girl cannot be seen as she is short and in the back of the hall. Quietly, she places the gym bag on the floor and pulls out a brand new, high-pressure, “Super Soaker Water Rifle,” originally known as a Power Blaster. The Super Soaker uses pressurized air (or Pneumatics) to force water out of the rifle’s barrel when being fired.

This particular water weapon has been customized with a double-pressure “air” clip, and an over-size reservoir filled with deer urine (hunters can purchase deer urine as a tool to attract deer). She slings the rifle strap over her shoulder, holding it in both hands, and boldly walks down a side isle, and up towards the speaker’s podium.

As Mr. LaPierre turns to greet her, and ask her to step back, she begins to unload the liquid in the Super Soaker reservoir. She shoots Wayne right between the eyes and all over his now grimacing face, including a full-frontal soaking. She then turns and easily nails the press and attending NRA members as they fail to run for cover, not realizing what the liquid was that was spraying all those close to the podium. Breaking News! They all quickly got the message.
So here’s the question Mr. LaPierre: Pissed off, or pissed on?

There’s only one answer… You bet!

By the way, if you were expecting a dissertation on the NRA and the Trump’s usual lack of knowledge, “Fuhgeddaboudit…” Forget about it – the issue is not worth the time, energy, mental effort, or emotional resources. So says the urban DICTIONARY. And the Trump, as usual is the real “doofus …”, as he proves over, and over and over again.