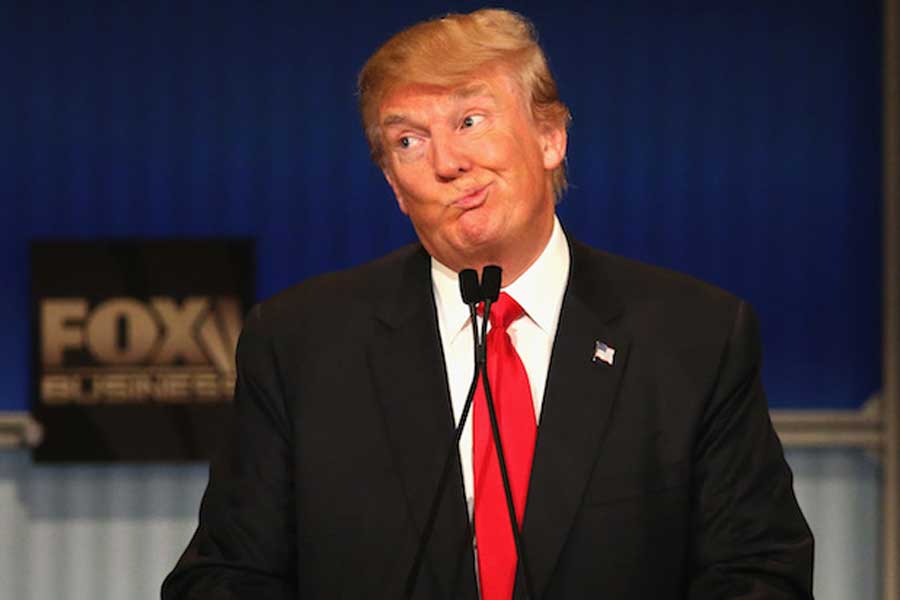 Somebody lied? I can’t believe it! My White House doesn’t lie…

NeWerd – A word or combination of several words or letters, written as one word, which describes a person, incident, or event, regardless of political affiliation, gender, nationality, or whatever.

With each new post on my blog, I will add a “NeWerd” or two, which may or may not have relevance to that particular blog. Whatever the case, it will have relevance to our world, at that time. If you don’t get it, just think of the word weird with the letter “i” removed. After all, Brokennews is about you and me and the world around us.

The NeWerd Dictionary will always be posted under link The Premise and above the link  Recent Posts, wherever they might appear on your screen, depending on what device you are using at the time. So here we go with a few NeWerds...

Banbannon – Get rid of the crazy white guy! He’s the POTUS ventriloquist and he is really dangerous.Where are Ivanka and Jarred when we really need them?

Brokennews – An average Bob’s commentary about various aspects of the news, both good and bad, presented to us all-day, everyday. And although this Bob tends to gravitate to the Moderate-Liberal side of most issues, he is aware enough, and smart enough to differentiate between The Good, The Bad, and The Ugly, when it’s shoved at us 24/7/365, by representatives of both sides of the various issues as well as by a news media that lacks the courage and or conviction to fight for the correct answer.

At the same time, Brokennews.press does acknowledge that since this viper named Donald Trump has come on the Presidential scene, many in the press have been known to muster up more courage and conviction in their approach to the news, to their commentary, their  questions,  and most importantly, their quest for honest answers. If it can stay that way from here on out, we all benefit.

DeVos – DeVos rhymes with Da Boss, a.k.a. POTUS. And neither has the experience or “education” required to support the very important positions they individually hold. Which student will flunk or be sent packing first remains to be seen.

Falsehood – Plain and simple… This is a real word, and it needs to be here, because lies are such a major part of who Donald Trump is. And even he doesn’t seem to get it… A falsehood is a lie, so let’s call it a lie. As in President Trump is a liar. As in Kellyanne Conway and Sean Spicer lie for POTUS.

FlynnFlam – Just more BS from an Administration that seems to live by the lie. And a former three star General, who was Trump’s national security adviser who first lied about speaking with a top Russian diplomat several months ago, before The Trump was even elected, and now conveniently can’t remember exactly what that conversation was about.

WOW! What an Administration!! A House Full of Liars, a President with apparent Attention Deficit Disorder whose brain power is rated at 140 characters, who understands little more than three sentences at a time, and can’t seem to ever address any Presidential topic in depth or with any real understanding. And a national security advisor with little or no memory. Great, just great…

So, Flynn-be-gone… Who’s next, and who knew what and when? Let’s all remember where that so-called buck stops. So when will Don-boy be gone? It can’t happen soon enough!!

KellyanneCon(which)way? – A person who knowingly reinforces false truths. A con? A falsehood? An alternative fact? Maybe a lie? What does it all mean? Not to worry, it will be partly taken back 2-3 days later.  (Come on Kellyanne, you’re better than this… Dump The Trump.)

McConnell19 – An elected official who is afraid of the truth.

NeWerd – A word or combination of several words or letters, written as one word, which describes a person, an incident, or event, regardless of political affiliation, gender, nationality, or whatever.

Overtalker – Any person who tries to “talk over” the voice of another person who is speaking, by statement, by question or by answer, as part of a conversation. For example, The Supremo-Interrupter is easily Chris Matthews of MSNBC. But there are others for sure: Ben Ferguson, Katrina Pierson, Scottie Nell Hughes, just to name a few, regardless of party affiliation.

Prejudent – The current (so-called) leader of the free world, who repeatedly, unjustly, unknowingly or knowingly, and without remorse, spreads hate through a preconceived opinion based on ignorance, and not based on reason or actual experience.

Session(s) – Time spent trying to convince others that the lie you are putting forth on behalf of your “so-called” employer our your life in general is the truth. And that the N-Word means “never mind.” Or it could mean, not so, not true, or never happened… again, as it relates to who you really are, and what you really believe… Or don’t want others to believe or know about you.

SNL – Truth through humor… A check and balance and one of the most honest and straightforward commentaries on the world around us. And although we may laugh, there is not always humor in the truth. So thank you Lorne Michaels and all, for your honesty…

Spicier –  When its Melissa McCarthy, and clearly more honest. Then again, when Melissa is Sean, her boss is Lorne Michaels and not The Trump. And even satirized accountability is often truthful.

Teletrumpter – Like the Teleprompter, a device used in television and moviemaking to project a speaker’s script, out of sight of the audience. The  Teletrumpter is somewhat similar to a teleprompter, except it is larger, with slower moving words, larger letters and various yellow light signals up and down the right and left sides of the screen, indicating when the reader might smile, laugh, look stern, puff a lip, pout, sniffle or cry. The top and bottom of the screen have red light reminders, alerting the speaker or reader, to speak calmly, try not to slobber or spit, don’t stray from the script and ad-lib, don’t be vile or disgusting, and most important… Try not to lie too much.

Transbender – Denoting or relating to a person whose sense of which direction to lean or bend does not correspond with his or her stated preferences or history. A person who is a mismatch between who they are, and those they wish to mislead or sway to a different point of view.

WashingtonDC – The  District of Donald-Crap 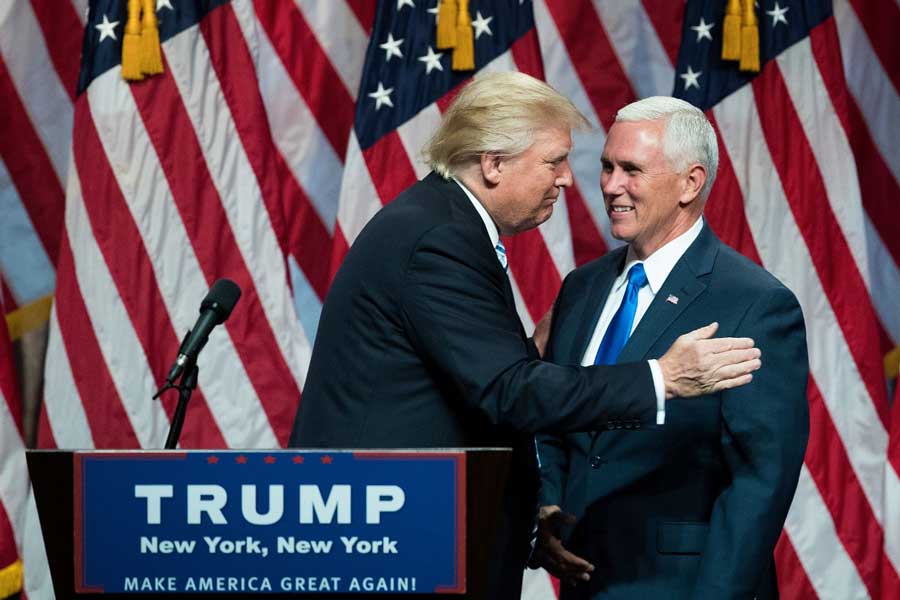 Mike, what are you talking about? What about the 25th Amendment?    Slate.com (Jay Angerer/Getty Images)

The bottom line…
With some relevance to the “NeWerds” above, please consider the following: The first 3-4 weeks of the Trump Administration have been like nothing we’ve ever seen. Is it the beginning of the end? Probably not but we must pray that Don-boy doesn’t start exchanging threatening tweets with that young fella in North Korea. As for China and Russia, they’re flexing their muscles but both are smart enough to know that there will be no winners in any kind of war or major conflict. There is far more to be gained through working together in a civil manner, to maintain peace.

Our “so-called” President is ignorant.  He lacks the intelligence it takes to hold the office of President, and repeatedly shows it by his lack of interest in learning and gaining the “Intelligence” it takes to do his job knowingly. He not only doesn’t get it, but he seems to have no interest in getting it. His tweets about a department store that has dropped his daughter’s line of clothes or jewelry during, or minutes after, an Intelligence Briefing seem to highlight his probable Attention Deficit Disorder.

The Russians are coming, the Russians are coming… There are continued references to a much deeper Trump-Russia connection than many in the GOP are willing to admit or explore. So I will reference the following link which will take you to a very recent Rachel Maddox commentary based on a well substantiated Washington Post Story. And if true, could and should lead to Trump and possibly Pence, both being bounced out of D.C. Click here.

All jokes and sarcasm aside… Yes there seems to be a good chance that President Trump knew about Russia’s involvement in many things which probably  need to be investigated. What’s so terribly sad about this current President is that he doesn’t know or understand what he should know and understand about his job. Granted, he’s an outsider, with no experience regarding many issues of the day. But he is now Then President, and he really shows so very little intellect, understanding or interest in his job. He needs to understand it’s not about him. We can now only hope that his resignation will soon follow and that a brighter bulb will light the Oval Office.

I hope you’ll subscribe to the BrokenNews Blog below… When you do, you’ll get the latest news and updates from brokennews.press before they go on-line. But when you do, be sure and look for the email confirmation to be sent acknowledging your subscription. Thank you…