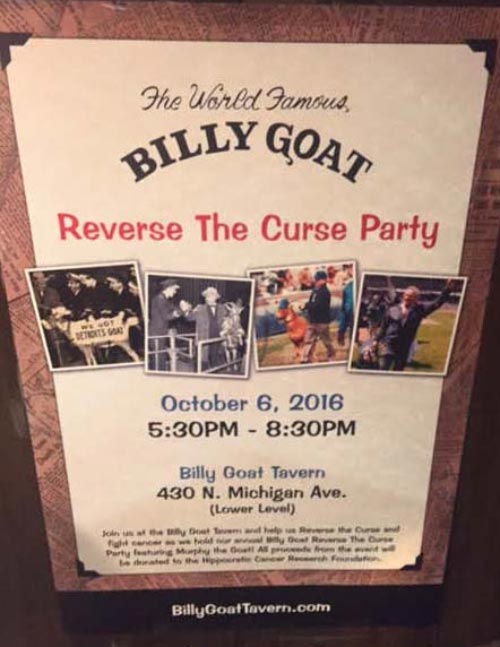 Chicago underground… “REVERSE THE CURSE PARTY”
Be there, at the BILLY GOAT TAVERN, 430 N. Michigan Ave., (lower level), October 06, 2016. It will run from 5:30PM to 8:30PM, and all proceeds from the event will be donated to the Hippocratic Cancer Research Foundation. Ya gotta go!

Now to be honest, for a number of years I have not been the biggest CUB’S fan. But that took a positive turn the day Theo Epstein moved into Wrigley.  Don’t get me wrong, I always want Chicago teams to win. That would be all CHICAGO teams!  And I have never understood the love-the-CUBS-hate-the-SOX, love-the-SOX-hate-the-CUBS mindset. It makes no sense.

A little personal history — I grew up in Hyde Park as a SOX fan, but I always wanted the CUBS to win!  And like many young boys back then, I hung out near the west exit of the old Piccadilly Hotel on Hyde Park Blvd., to get the YANKEE’S autographs when they were in town.  In the summer of 1962 (Yikes!), I was a vendor at Comiskey Park, Wrigley Field, and Soldier Field … And it was the best summer of my life!

After moving north in my early 20’s, I became much more of a CUB’S fan. And then everything seemed to go south, 1969 broke my heart. They just seldom made the kind of moves that the (almost) always great teams, regardless of the sport, seem to make to stay on top — The YANKEES, The RED SOX, The PACKERS, The CELTICS & SPURS.  But the CUBS never seemed to get it. And I was the guy who, until fairly recently, used to call ESPN Radio and repeat with each call, “If the CUBS were sold and moved to another city, Wrigley Field would still sell out for three years. No one would even notice …”  That is no longer the case. So the question now is,  Does that Goat Curse really exist?

The bottom line…
Here’s what I would suggest regarding the lifting of the so-called curse:  Change the goat’s name. Ya got a Greek tavern owner who names his goat “Murphy”?  What’s that all about? An Irish name? How about Aristotle, Aris, or Yannis or Yanny, or Demetri or Kostas. Or how about just applauding the Ricketts for bringing in Theo Epstein, who in-turn brought in Joe Maddon and a whole lot of really good baseball players.

Chicago, you and CUB fans all over the country have suffered for decades because, for the most part, the owners at the time couldn’t get the job done.  That no longer appears to be the case. And although I do suspect that this year, or next year, will be the CUB’S year to win it all… Goat s_ _ _  happens!

My final thought on this is quite simple:  Get the goat into Wrigley for every at-home playoff game. Give the goat his own private box, with plenty of hay, or grass or whatever the hell goats eat. If the CUBS win, the curse has been lifted. If the Cubs lose, expand the Tavern’s menu to include Goat Pita Sandwiches. Chips! No fries!!