The Awakening… Get rid of the bum! 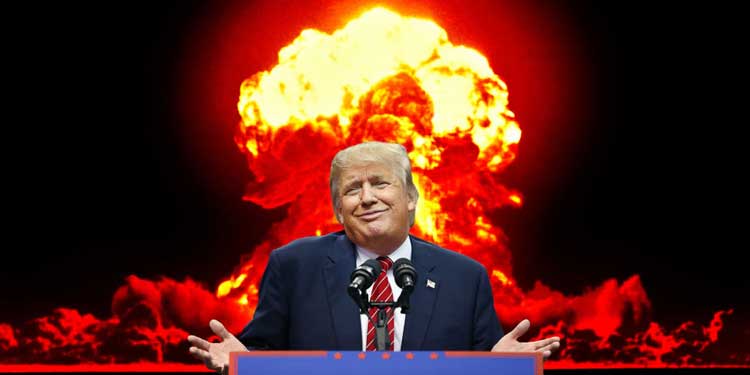 It’s not only about worldwide destruction, as expert John Noonan explains. Photo courtesy of Getty Images.

I’d like to think someone in the GOP read my June 13, 2016 column, Prejudice 101. Prejudent Trump? It does have a ring to it. DING DONG!! But I am quite sure that what you are about to read, has been on the minds of many, for months and months. And only now is it beginning to take form. And if all goes well, it should play out rather nicely. Click here to read more.

It was that June 13th “The bottom line…” that made the point: Now I could go on, and on, but let me close with the idea that this blustering pile of prejudice needs to be stopped from becoming President, the highest political ofﬁce in our land, and the people that can do this are the Republicans. That’s right, the GOP must come out in force, under the leadership of Paul Ryan. The simple words are “enough is enough… We can not risk letting this ignorant racist, prejudicial, reactionary man gain command of our country and especially our military…”

In force, the GOP can do what it takes to stop him. A strong third party candidate, stacked, backed and sponsored by the powers that be, within the GOP, could take enough votes away from The Trump. Yes, it will hand the Presidency to the Democrats. But at the same time, it will tell this country, and the rest of the world, that the GOP really cares. It will set a precedent that is unheard of in any previous election in this country, and possibly in any democracy. This electoral season is unlike anything that has come before it. It is ridiculous and very scary to think of The Trump as President. It would be The Bad, The Worst and The Ugly, of American politics.

The GOP needs to re-vamp, alter their direction, and their principles. They need to set out and ﬁnd what Americans want and need… Everyday Americans, and not just the white millionaires who fund their campaigns. The GOP needs to sacriﬁce the short term, in favor of the long-term. And that would be what’s best for the majority of Americans and the saving of our country… to keep America Great…

I wrote that column over two months ago, I was hoping something like what I wrote would happen. But it seemed so unlikely. But guess what? Yesterday, August 08, 2016, was  a day that could go down as one of the truly great days in American politics. And depending on the outcome, I’m hoping it will be a great day for America. And if it is, we will have the GOP to thank. And who woulda thunk?

Three stories hit the news yesterday, all of which I expect will have a huge impact on the next 90+ days before the election. The ﬁrst I heard about on the radio last night, on the Norman Goldman show, on WCPT. It addressed one Evan McMullen and his GOP (within that party’s), 3rd party candidacy. And if that sentence didn’t make sense, please read on and be stunned…

The best account of the Evan McMullen story that I found was- Click to read more. Please keep in mind that regardless of what Mr. McMullen purports his reason to be, there is a clear understanding by all, that taking votes away from Donald Trump, will only help  Hillary Clinton. And as much and as often as the GOP likes to rip Hillary, they also know that she is a smarter and safer bet when it comes to keeping America secure and safe.

The second story of importance was- GOP senator: ‘I will not be voting for Donald Trump’ Click here to read more.

The third story, which clearly relates to Evan McMullen and his decision to run within the GOP as a 3rd party candidate to undermine The Trump. This was the CNN story –  50 GOP national security experts oppose Donald Trump. Click here to read more. And once again, we are talking about a secure and safe America. And these 50 security experts can read The Trump as someone who has no depth of experience other than someone who hurts people, takes advantage of people and lacks the overall knowledge and experience required to sit behind the desk in the White House as the Commander In Chief. And oh yes, let us not forget his no thought, reactionary, mindlessness.

The bottom line… So it seems to be happening and I couldn’t be happier. But here is where the GOP also needs to direct their efforts. The so-called “autopsy” which was supposed to have taken place when Romney lost to Obama, apparently never happened and or whatever was learned resulted in Donald Trump. ARE YOU KIDDING ME!! Donald Trump and an extremely weak ﬁeld of other GOP primary candidates who couldn’t compete with the three ring circus Trump lives in.

The GOP needs to look at America and the needs of all the people, not just the white millionaires. The GOP needs to take stock of race and people of all colors and persuasions. They need to quit blaming Obama for literally everything, including job loss when in fact, the President was left with a big hole to dig out of when he ﬁrst came into ofﬁce, and he has done an admirable job. At the same time, the GOP might take into consideration the campaign Mitch McConnell has waged against everything Obama, and look at the number of lost and or expanded jobs that didn’t take place due to  the failure of Congress to support many of Obama’s ideas, infrastructure improvements being one that could have created thousands and thousands of jobs.

So when all is said and done, blame McConnell and a Republican Congress for most of what the Obama administration has  been blamed for. Get rid of The Trump, take into consideration the true needs of America. Future elections at all levels of government should have outstanding candidates from both parties. America can only prosper when both Democrats and Republicans can offer decent, knowledgeable, experienced  candidates who don’t go after Gold Star victims and parents, people of color, and of various religions and disabilities.

Yes America is great. And we all want to keep it that way. Put and idiot like Donald trump in the White House, give him access to the military and nuclear weapons and all bets are off.

John Noonan (article linked to photo above) knows nukes, and his opinion about Donald Trump is-  “IT’S HOW HE’S RUN HIS BUSINESSES FOR DECADES: ‘I CAN DO WHATEVER I WANT.’ IN THE BUSINESS WORLD, IT WAS SHADY AND UNETHICAL. IN THE NATIONALSECURITY WORLD, IT’S DOWNRIGHT DANGEROUS.

So I repeat… Get rid of the bum! Before it’s too late! Now that would really be great…