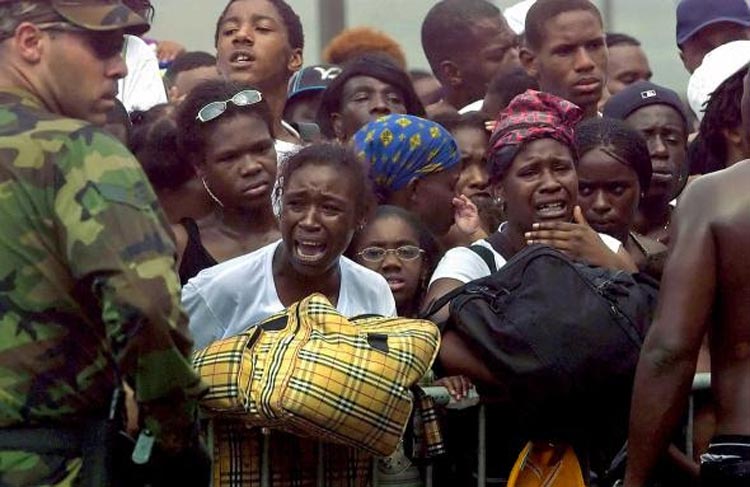 Victims of Hurricane Katrina argue with National Guard Troops as they try to get on buses headed to Houston on Sept. 1, 2005.
Photo by Willie Allen Jr./St. Petersburg Times via ZUMA Wire

The answer is simple: Treat others the way you would like to be treated. The actual way to go about that? Not so easy. Yes of course Black lives matter. As do White lives, Brown lives, Police lives, etc., etc. All lives matter. But all that isn’t so black & white; lots of grey areas.

A little background: I’m an older white guy who was raised in Hyde Park, on Chicago’s (not too far) south side, back in the 50’s and 60’s. That’s where my liberal roots were sown, and I have always been proud of that fact. I went to the Hyde Park Y.M.C.A. for 10 years beginning around the time I was 7. It was a great place to grow, and learn, and experience other people, who didn’t always look like me. That of course works both ways- and it did work.

I went to Hyde Park High School which, during my time there, grew to be 60% black. There was inter-racial dating, racially-mixed parties, both at the “Y”, and at Hyde Park HS. Other schools and community clubs seemed to reflect the same, including the Lab School, U-High, The St. Thomas School(s), and most certainly The U of C. (and if I left a few out it wan’t intentional). The point being, everyone really did get along pretty well.

Now waaaaay back then, things were different. There were very  few gangs, they were made up differently, and there were no war-zones to speak of. I also don’t remember hearing of issues involving guns and drugs on the street. Most importantly, throughout the area, there was a shared sense of respect, and a desire and a willingness, to get to know your neighbor, your classmate, the other gym rats. Looking back, most of us really felt we were all in it together. That was Hyde Park.

One specific lesson remembered…
I remember going to an assembly one day. It was January 1961, and the guest speaker was TV-newsman, Alex Dreier (1916-2000). He was well known in Chicago for his work on radio and television. And most of us thought it was a pretty BIG deal that Alex Dreier was at our high school, to speak to us. All these years later, every time I have thought back, there isn’t much I can remember or tell you about his speech, except for this… Mr. Dreier told us that when he took piano lessons, his parents reinforced in him the importance of playing the black keys as well as the white keys. And that’s the way my friends and I grew up, understanding the importance, of the black keys, and the white keys.

Regarding Black Lives Matter…
They will always matter to me, always, because that’s the way I was brought up. But I do have several issues with the so-called movement. Many people, of all colors, everywhere in this country do not remember or realize that BLM, initially grew out of Hurricane Katrina. It took on another dimension after the killing of one Michael Brown, in Ferguson, Missouri, to really bring it back into the forefront of Breaking News, on every television, news broadcast.

I have to admit, the entire Michael Brown thing has always bothered me because mixed testimony came out that didn’t make it clear as to exactly what happened. And when all did come out, the way I read it was: 1. Michael Brown, along with a friend stole cigars from a convenience store in Ferguson, and on the way out, Michael Brown grabbed and shoved the store clerk, a man about 1/2 his size; 2. Michael Brown was not stopped as a robbery suspect but because he was walking in the middle of the street; 3. Brown did assault the police officer who was in his vehicle, and he did try to grab the officer’s gun. And the gun did fire during the struggle, but no one was shot; 4. Michael Brown then left and was running away from the police officer, when the police officer was able to exit his vehicle, and go after him, ordering Brown to stop. When he did stop, Brown turned and started walking towards the police officer. When ordered to stop, he kept advancing on the officer and was shot multiple times, dying in the street.

Testimonies didn’t always match, and there were reversals, but in the end, the police officer was not indicted by a grand jury. End of story… Well not exactly.

Again for the record, the looting and demonstrations in Ferguson, following the death of Michael Brown’s death brought out more thugs, breaking into stores, looting, setting fires to buildings and cars. As well as committing other acts of violence. And these actions are not to practiced or praised. 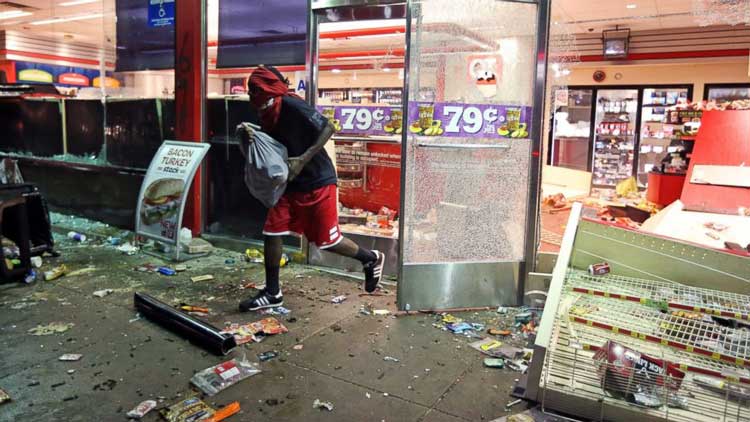 The bottom line…
So my liberal roots get stressed from time-to-time… Too often, I get the feeling, that Black lives, don’t matter to other black lives. Why is there so much crime in the black community? Why isn’t there more conversation going on within the Black community to help put and end to the gangs, the guns, the drugs, and the killings. Why aren’t more Black and White people talking to each other, openly and for all to hear, discussing the issues in a public forum.? And finally, why aren’t we all playing both the black and the white keys? Wouldn’t the music just sound better?

Part 2. Will deal with issues raised in this column.