Trump is now using the Teletrumpter… 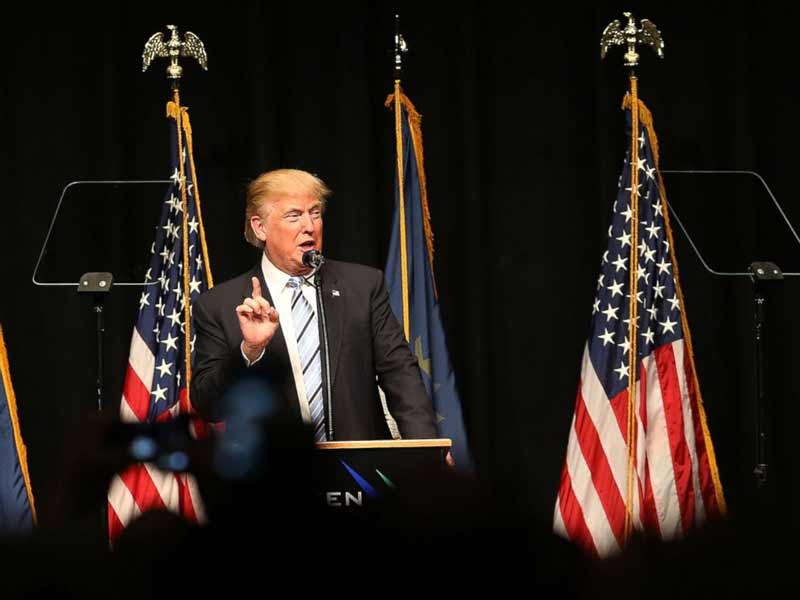 Like the Teleprompter, a device used in television and moviemaking to project a speaker’s script out of sight of the audience, the Teletrumpter is somewhat similar to a teleprompter, except it is larger, with slower moving words, larger letters and various yellow light signals up and down the right and left side of the screen, indicating when the reader might smile, laugh, look stern, puff a lip, pout, sniffle or cry. The top and bottom of the screen has red light reminders, alerting the speaker or reader, to speak calm, try not to slobber or spit, don’t stray from the script and ad-lib, don’t be vile or disgusting, and most important… Try not to lie too, too much.

The Teletrumpter, which travels with The Trump whenever he has a speaking engagement was borrowed from the George W. Bush Presidential Library, where it was part of a much visited and admired exhibit, which featured W’s Etch-a-Sketch collection.

As for how The Trump uses this device: His advisors are encouraging him to ad lib no more… It is better (and safer) he should read. And it is ever so obvious as he reads, that he has very little knowledge of the words going into his eyes from the “Teleptrumpter”, and coming out that often blubbering, mouth that so often spews forth lies. His handlers are trying to make him look more in control, more Presidential if you will. But let us not be fooled… Trump is Trump. Be assured that sooner or later he will revert to the real Trump. At that point he will once again lose control, and God only knows what will spew forth from The Trump’s pucker.

More “Tid-Bits” as to why red flags are flying on both sides of the aisle…
As a Presidential candidate for the GOP, Donald Trump has lots of people worried, and not just those in Congress. But one prime example of someone who is most definitely worried is the Senate Majority Leader. This past Sunday, on ABC’s This Week, with George Stephanopoulos, George asked Senator McConnell (R Kentucky) if The Trump was qualified to be to be President. His answer was short and simple, “Look, I’ll leave that to the American people to decide...“ And of course it immediately reminded me of Barak Obama being elected President in 2008 and of McConnell’s failed attempt at keeping him from being re-elected in 2012, though as we all know, he was. Of course, when left “to the American people to decide…” It apparently made no impression on McConnell and his followers when it came to helping America. To this day, they continue to basically ignore our president and fight everything he tries to accomplish, every step of the easy.

The bottom line…
A saying we have all heard over the years is that “you cannot tell a book by it’s cover…;” but you certainly can tell The Trump by the way he lies, speaks without thinking, back-pedals, changes positions, tries to divert or place blame, and likes to say he “heard” this, or he “heard” that.

Be assured that your worst nightmares about The Trump could turn out to be true. This frightening, comic book bad guy, is a bad guy. And aren’t we all tired of his insulting, lying, racist, bigoted, fascist persona? And who is he really? I firmly believe that Trump the Transbender leans way more to the left, than he does to the right, and that is something the GOP is most definitely worried about. Although I don’t believe he will beat Hillary, until the votes are counted, we should all be very, very afraid; all of us, Republicans, Democrats, Independents, and whomever… This con man “Apprentice” is qualified for very little, other than being a world class bully.

So the next time he is reading one of those speeches written for him from the Teletrumpter, listen carefully to what he says about national or world events. Listen to his answers about how he will solve problems, deal with world leaders, negotiate international business and policy matters, and be prepared to be stunned. I mean, can you imagine?

Personally, I look forward to his debates with Hillary. The Trump will neither have any substantive answers to the really tough questions, nor a depth of understanding of the question. And it will be obvious that Hillary does, and she will call him on it. And that’s when the real Trumpster will once again show his ignorant and uninformed true self. And then the real Breaking News will be repeated over, and over, and over again, when he spews forth one insult after another as he once again, tries to divert an un-question, in attempt to change the subject.

The question then becomes – When will those supposed Trump supporters get off their tails, and realize what a threat to sanity, peace, literate comprehension, and preserving a pretty damn good way of life, this con artist is? Make America Great Again? How about America is great, let’s keep it that way and make it even better?