Joy to the world… 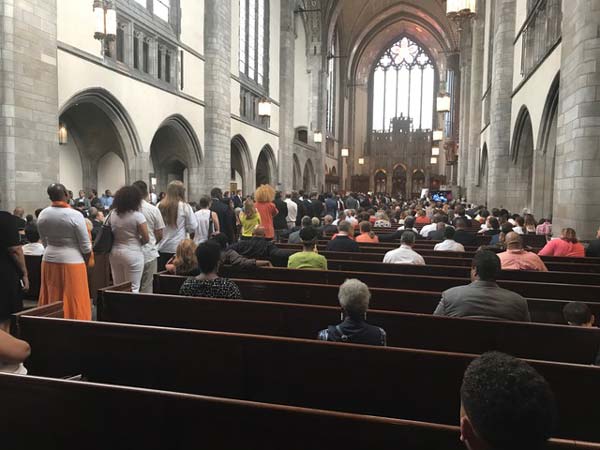 Xavier Joy memorial service 30 min. prior to the start of the service. By that time, nearly every seat at Rockefeller was filled, while others were standing along the side aisles (Photo taken by Bob Danon)

This past Friday morning (06/16), was the memorial service for Xavier Joy, the young man who was gunned down on Chicago’s south side, two blocks from his home, at 10:00 pm, on the night of June 08, 2017. I did not know Xavier, or “X”, as his father and friends called him. But his step-grandmother, Fran Joy is a friend of mine. Fran is a wonderful artist and recently had an exhibit in my Evanston art gallery, The Danon Gallery. Last week, I posted a column about Fran the artist, a particular painting she had done which I purchased, and the murder of her grandson. You’ll find that article of June 12 here:

The service itself was unlike anything I have ever experienced. It was held at the Rockefeller Chapel at the University of Chicago. Because I grew up in Hyde Park, I was familiar with this structure. And although I had not been inside in decades, one never forgets. Wikipedia will tell you that- “Rockefeller Chapel is a Gothic Revival chapel on the campus of the University of Chicago in Chicago, Illinois. A monumental example of Collegiate Gothic architecture, it was meant by patron John D. Rockefeller to be the “central and dominant feature” of the campus; at 200 feet it is by covenant the tallest building on campus.” But until you have been inside, those few Wiki- sentences don’t come close to the grandiose architecture, inside and out.

Like many important structures of religion, the potential greatness is often not realized until the people have filed in, the music has been played or until the actual words are spoken or sung, reaching the highest and most distant corners, the carved ceiling beams or the highest of the stain glass windows. Such was the case on this particular morning. There were easily 1200 to 1500 people at this service. And barely a dry eye in the place. So sad…

Almost every pew was full, while still others in attendance stood on the side. The faces were black, brown and white. There were young children with their parents, dozens of teenagers. There were adults of all ages- young, older, old and still older. Many of those in attendance were friends of the Joy family.

The service began with a musical tribute by Orbert Davis, followed later on in the service by the beautiful voice of Dee Alexander. A procession with  African drummers marched down the long Rockefeller aisle, a musical  tradition by the Drum Ensemble from the Muntu Dance Theatre. The Opening Prayer and Reading of Scripture was given by the Reverend Dr. Reginald Williams Jr. The Speakers included: Jan Schakowsky and Bobby Rush, both U.S. Congressional Representatives. Michael Stautmanis was there representing President Barak Obama and read a touching letter from the President and his wife, Michele.

Other speakers included Rebecca Huffman and Michael Brown from City Year Chicago. Gabriel Sanchez, the love of Xavier’s young life spoke with a beautiful smile, and tears, of a past together and a future snuffed out just a week earlier.  Xavier’s mother, Nykea Pippion McGriff, her eyes hidden behind large, dark sunglasses, remembered the pride and joy she found in her son’s young life with memories that will live on forever.

Xavier’s former school principal at Whitney Young High School, Dr. Joyce Kenner, spoke… her words brought laughter and tears. She mentioned his smile, and his caring personality. She spoke of Xavier’s accomplishments along with so many others she has had the honor to guide over the years, she too cried in her closing… a mother to so many. She has seen and heard of so many young black children losing their lives. She said it must stop, She said “we must give back to Xavier…”

The last to speak was Ra Joy, Xavier’s father. He made us smile, he made us laugh, he made us cry. The pride in his son was seen and heard over and over with great sports stories, stories of trips to water parks, “X” being a proud big brother, about his son’s competitive nature whether in football, shooting baskets, or playing chess.

Hearing the mother and father speak of losing their wonderful son reminded me of that very sad expression- Children are not suppose to die before their parents. I’ve known a few other families over the years when parents buried a child and I can not imagine anything as painful.

Xavier Joy was a graduate of Whitney Young High School. He was a good student, an accomplished athlete, a wonderful son, and a great friend to many. He attended Morehouse College for a short while, returning home, to mentor young students in both the Chicago and Evanston School Systems. He gave back… Xavier gave back because he learned from his family that, that’s what one does.

A young man, Vic Mensa, my guess a friend of “X,” closed out the service with a rap song. It wasn’t difficult to sense his feelings during this moment. He was so involved, so terrific with the words pouring from his heart. 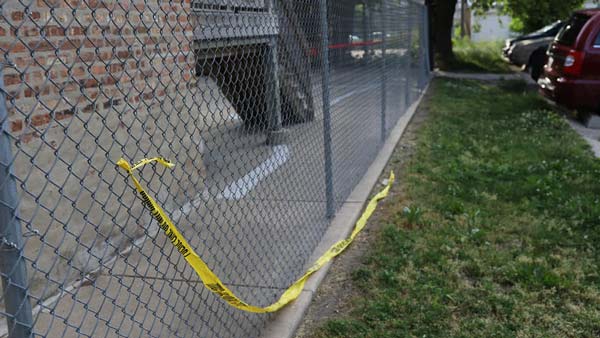 AN ALL TOO COMMON OCCURRENCE- Scene in the 6200 block of South Ingleside in Chicago, where Xavier Joy was killed late on June 8, 2017.
(Antonio Perez/Chicago Tribune)

The bottom line…
For over a week now, I have learned about, and thought about Xavier Joy. This was a terrific kid. And for that week I’ve been crying, and I suspect I will always cry when I read what I and others have written, and I didn’t even know him. His grandmother is my friend and I feel her pain. And on this morning, over a thousand people, in a beautiful setting, laughed, and cried and hurt so deeply. And all I can really think of is how many times a week this type of terrible thing happens to our black youth… To Chicago’s black youth. Yes, the circumstances of each shooting and murder are different. But losing a loved one, particularly a child is unacceptable. Not just because a loved one’s life is so quickly and brutally taken. But because the loss of even one child, or one person, gunned down can be stopped. And it should be stopped. So why hasn’t it?