What a circus! And it ain’t funny… 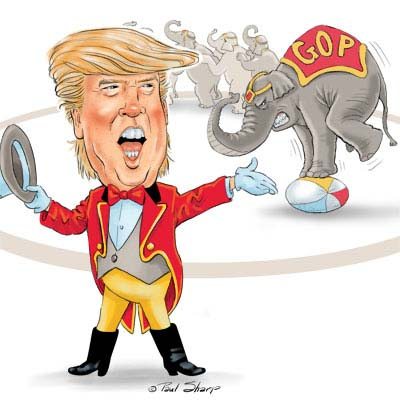 In the center ring…
“Ladies and Gentleman… Welcome to the greatest show on earth! I Donald J. Trump, President of the United States, elected by the greatest majority ever, with the largest inaugural crowd ever in attendance, can and will fix everything that needs fixing, anywhere in the world. And I will do it in a biglee way.” Yada, yada, yada…

So the ringmaster is POTUS45, and the ventriloquist has been Steve Bannon, a former chair holder on the Security Council. And why on earth Bannon is anywhere near the White House is a mystery to many.  But there is some similarity, I suppose, to Bush-Cheney, but with several differences. Now “W” may not have been the sharpest tack on the bulletin board, but he isn’t stupid, and he surely isn’t ignorant like our current, so-called President.  I also believe that he and his Presidency were “taken over” by Cheney and the neo-cons, and they ran with it. Some of those neo-cons were the same people who tried to talk Bill Clinton into invading Iraq back in the 1990’s- To read that letter in full, Click here

The sideshow continues…
A Spicer press conference often has a chaotic bent. I wonder where that might come from. You’d think Spicer would eventually tire of lying and just resign because he feels he’s better than that. But I guess not. Then there was Sean Spicer’s recent treatment of journalist and White House Reporter, April Ryan, not to mention Trump’s thoughtless remark to Ms. Ryan suggesting that she arrange a meeting between him and the Congressional Black Caucus, which does have a slightly “colored” slant to it. As if her being an African-American made her an insider. My money is that Trump didn’t even know what the CBC was. More info on that exchange here 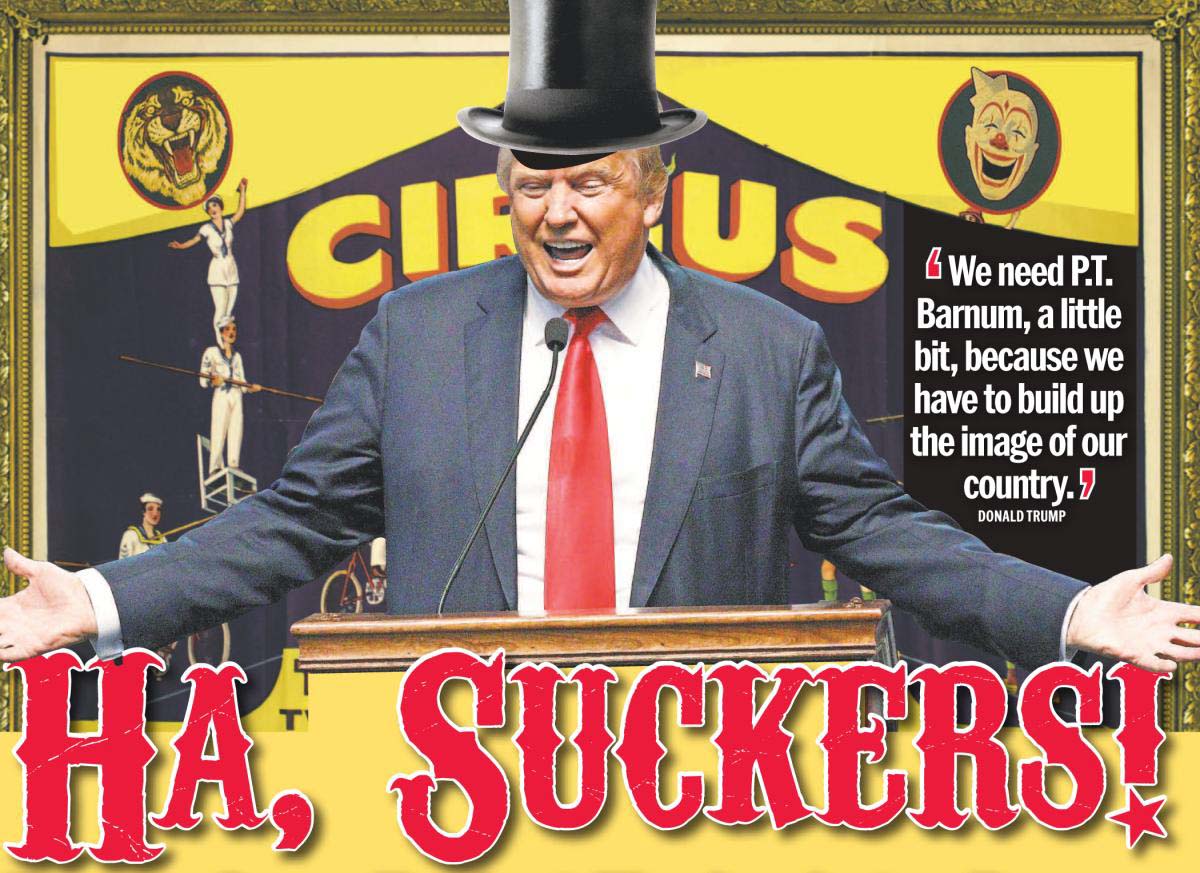 Is it the White House or The Lie House?
One would hope- VP Pence, Sean Spicer, Kellyanne Conway along with the other Team Trump, blonde-talking-heads, plus good-boy Jack Kingston, and all others who defend this dolt-of-a man, would at some point get tired of lying for The President. Russian lies… The never ending Russian connections and deflections, make me think he’s not long for office. Then you can add in the “pussy” comments, which clearly would tie-in/lie-in, this President’s misogynistic, groping, support of Bill O’Reiley and his millions of dollars paid out to women he harassed. Trump not only doesn’t get the big picture, he doesn’t get the little picture either. *DonDongGoneWrong — Don-boy, Women are to be treated with respect.

It really never seems to end… The accusations, the investigations, the stories, the deflections, the Tweets, and lies that accompany this President almost daily, is enough to make one throw up in disgust. How about getting rid of the bum, let Pence take over? At least he has a brain. And then if the DNC can ever get their act together, along with a strong, decent candidate, the country might get back on its feet. 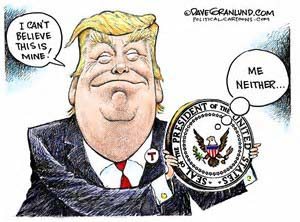 The bottom line…
It is not my intention to continually criticize, or make jokes or sarcastic commentary about President Trump, week after week. But the guy just seems to beg for it… Either by saying or doing stupid things, by lying out of ignorance or to deflect from other questionable issues going on with him personally, within his administration, or his family.

A very recent example, of the true stupidity, and ignorance of this President, can be seen in the link that follows. This particular YouTube link will take you to The Trump exchange with King Huessin of Jordan, in the Rose Garden, on April 05, just a few days ago. The American President must read almost everything, and he reads like a not very smart, 6th grade boy. Then listen to the King of Jordan speak… The difference is stunning. This President is an embarrassment. He knows and understands sooooo little. To view the President Trump joint news conference with King Abdullah II of Jordan click here

When Trump lacks a script, he has little if anything to say. When asked questions by the press when he doesn’t have a scripted answer, everything falls apart. Questions don’t really get answered. Loose, irrelevant, unknowing answers flow from blubbering lips, searching for some relevancy, which often fall to blaming others, far outside the relevancy of the original question: “I won the election biglee,” “the crowds on the mall were record breaking,” “it’s Obamas fault,”  yada, yada, yada, It all borders on just whacko, crazy, and bottom line ignorance. Enough is enough and the “Russian Connection Investigation” can’t get to the final truth soon enough… One way or another.

So last night (April 06, early morning April 07, in Syria) the US, under the direction, and probable lack of understanding, of Donald J. Trump, bombed Syria. I will write more on this in several days. To set the tone, I do think it was a smart move. However I don’t believe for one minute that seeing the photos of those babies, the children and all who were gassed during the Syrian bombing this past week affected The Trump one bit… not a sniffle, a gasp, or one tear. And thank God we have Generals in place who know what they’re doing.

As for Trump dealing with North Korea, if you read last weeks post, you know my position. If you didn’t, please click here.  To sum up… Kim Jong-un, like Assad, must go, one way or another. And I suspect we’ll know more about that situation soon after The Trump meeting with President Xi of China this weekend.

This week’s NeWerd is – * DonDongGoneWrong – Don-boy… Women are to be treated with respect. You and your guy pals need to get a clear understanding of that. And if you can’t, at least keep your misogynistic mouth shut. Do ya get it?